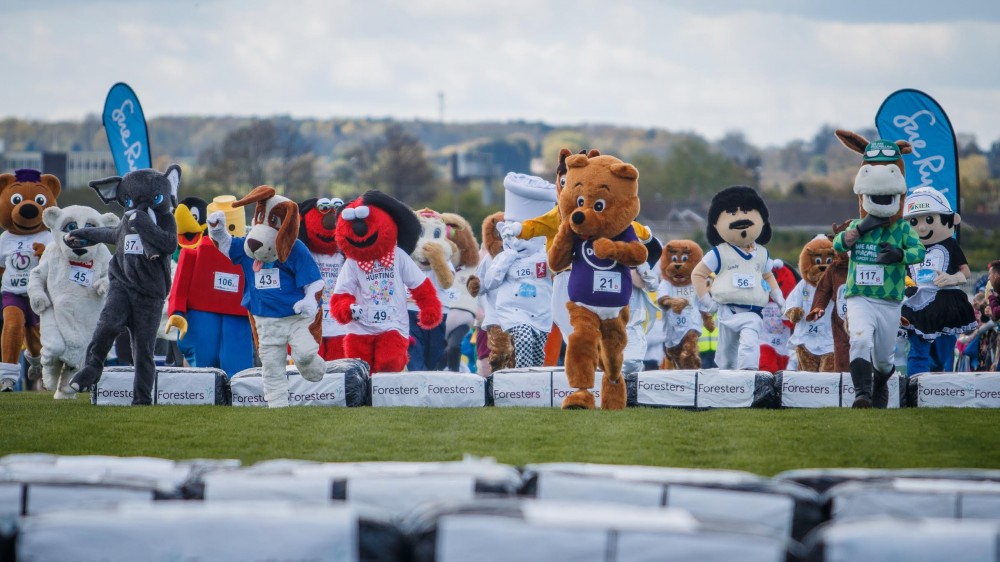 The Harris Partnership were recently represented in the legendary Mascot Gold Cup that takes place annually at Wetherby Races by Vector Design’s resident Landscape Architect Daniel Wilkinson. Racing as Harris the Hound, along with 130 other furry characters, they helped break a Guinness world record for most mascots in a race.

Organised by national healthcare charity Sue Ryder and sponsored by Foresters, the event celebrated its 10th running in the Wetherby sunshine mascots as attended from all over England plus one from Northern Ireland and one from Wilderhausen in Germany.

The Mascot Gold Cup has been held at Wetherby Racecourse since 2006 and has now raised £150,000 for Sue Ryder Manorlands Hospice after the event also broke its previous best in terms of funds raised. Over £18,000 was raised with around £3,000 being raised for other charities too.

As part of the 10 years celebrations mascots attempted to break the Guinness World Record of 100 mascots in a 1Km race.  One hundred and thirty mascots took part with 128 finishing and Guinness ratified the new record. First across the line in this race was Red Marauder the Horse of the Ingmanthorpe Racing Stables with former Leeds and Scotland football captain Gary McAllister  ‘in the Saddle.’ Harris the Hound came in a close second.

Then came the traditional Mascot Gold Cup where the bumper race day Wetherby crowd cheered on the field as mascots sprinted, shuffled, stumbled and fell (especially at the Bradford Markets third fence) along the final furlong towards the finish line.  Daisy Dog of the White Ribbon Campaign was first, with Harris the Hound coming in a respectable sixth place.

Harris the  Hound when interviewed afterwards said: “Was fantastic to put the Harris name out there and gain the company a place in history in the Guinness Book of Records. Was also great to stuff Ronny the Rhino from Leeds RFL and Freddie Cougar from Keighley RFL who as professionals should be ashamed to be beaten by an amateur. Every dog has it’s day I suppose!”